ORLANDO – If Progress Software Corp. is trying to mobilize its partners to do one thing, it’s to modernize.

That was one of the key themes coming out of this year’s Progress Exchange, a partner conference of about 1,000 customers, partners, and company staff. While Progress didn’t share any new announcements on Tuesday, the second day of the conference, the company’s executives hammered home the message that its partners need to start planning for the future, if they want to avoid becoming irrelevant.

In fact, any company today needs to constantly prepare itself for disruption, said Progress CEO and president, Phil Pead during his keynote address. After all, it doesn’t take much for advances in tech to change how things are done, he said, pointing to retailers like now-defunct music store Tower Records as an example. 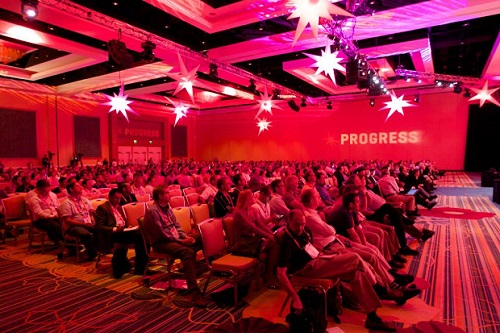 “I’m here to tell you – you don’t even know who your competitors are,” he said.

For the past few years, Progress has been hard at work, pushing its partners to think about how changes in tech may affect their businesses and livelihoods.

In June 2013, the company introduced Pacific, a cloud-based application platform that helps developers push out their apps more quickly. And just last week, it announced it would be adding BravePoint Inc. to its roster of acquisitions. As part of Progress, the Norcross, Ga.-based consulting company will help partners figure out how to adapt their technology and business practices for the future.

Progress is also pointing its partners towards other ways of modernizing their businesses, including encouraging them to try building applications related to the Internet of Things. In a demo on-stage on Tuesday, Progress showed its partners how they could build apps for wearables like FitBit.

They also brought partner Jungle Lasers LLC on stage to show how the company plans to use GPS data to display where snowplows are located, how much time their drivers are spending on the road, and so on – all valuable information for municipalities that rely on snowplows to keep their roads clear in the winter.

While these real-world examples make for great case studies, on a practical level, the trouble with modernizing is that it often takes a lot of time before companies can really get moving, especially if they’ve been using older systems, says Sophy Nathanail, CEO of Edmonton-based Apero Solutions Inc. The company was founded in 2011.

As a Progress customer, Apero has invested a lot of time and money upfront into ensuring its enterprise resource planning (ERP) software, Latitude, can be ready for constant updates and refreshes. However, she says she recognizes not every company is blessed with the ability to do that.

“It’s a huge investment, and Progress is a solid, solid core … So sometimes, if you’re not looking forward, you may think the status quo is fine,” Nathanail says. “But the reality is that, to grow, you can’t really sell the old legacy, because people are looking for applications that are modern-looking.”

From Progress’ point of view, getting partners get up-to-date is where it can help, using the company’s core platform, OpenEdge. While the platform has been around since the 1980s, it was built using a flexible, adaptive programming language called Advanced Business Language (ABL), and that language can help them gradually refresh their own applications.

That’s been key for customers like Apero, which has built its ERP software using OpenEdge and ABL. Instead of creating new systems from scratch for evolving needs, like better, simpler graphical user interfaces, its developers have just changed its front-end systems without having to make fundamental changes to its basic business layers.

Allowing partners to quickly update their technology is one of Progress’ greatest strengths, says Larry Carvalho, an analyst and research manager for platform-as-a-service at IDC.

“They have a very good overall application system … Progress gives a good solution to help [partners] overcome challenges in a short period of time,” he says. “One of the things that they talk about is rapid application development – applications written by users, without developers. Automation of business rules as well as business rules written by end users, or business users. Those are the differentiators which Progress offers.”

However, it’ll be important to see how Progress will shape its acquisition integration strategy – it’ll need to weave disparate pieces of technology together and to explain why they’re useful, if it hopes to keep appealing to partners and to the developers who work for them, Carvalho says.

For Pead, all of that is coming, even if Progress isn’t there yet.

“What we care about is just making this a great user experience for developers. Ultimately our goal is to become the preferred destination for developers and architects.”