New York, NY – Could Symphony be the future of enterprise communication?

The company sure hopes so.

The self-proclaimed startup, headed by former senior Skype executive David Gurle, today launched its messaging and content distribution platform and it’s one that’s received backing from over a dozen Wall Street banks and being dubbed the “Bloomberg Killer.” 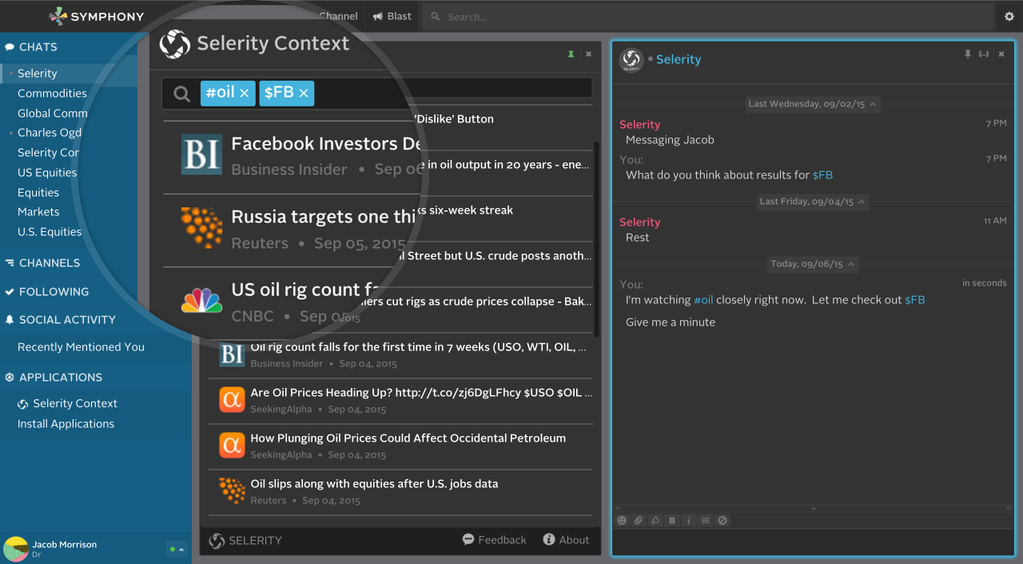 “It was designed with compliance at heart,” Gurle told reporters at the first of several launch events in several cities across the United States, UK, and Asia.

In fact, the company takes regulation in areas such as record keeping and archiving so seriously that it has an agreement with the New York State Department of Financial Services.

The platform combines the functionality of pretty much every major form of communications tool out there, including social media platforms.

Of course, there are private and group instant messaging. Users can also create chat rooms with explicit rules on who can see, read, copy, and contribute, there is a Twitter-style follow system as well as “cashtags”, a topic generator specific to corporate acronyms preceded by a “$” sign similar to, but more specific and complementing, keywords via hashtag.  There’s even Facebook’s wall posts and like systems, integration with Google Hangouts, and even MSN messenger’s nudge function in case a colleague fell asleep at their desk.

Surprisingly, at the time of demonstration, Symphony-hosted email was not available, although Gurle promised, that is definitely coming, given its “universal” usage.

All of this sits on top of a level of security that Gurle spent much of his presentation (touting).

In essence, end-to-end encryption within each instance of Symphony gives companies the keys, meaning that even under subpoena, Symphony is only able to unable to decrypt data it hands over to authorities, in a style similar to Apple’s approach to its user data.

But the platform goes beyond that.

We mentioned at the beginning that in addition to being a secure messaging platform, Symphony also aims to be a content distributor.

In order to do so, it has partnered with financial newswire Dow Jones, corporate data provider McGraw Hill Financial and analytics technology company Selerity. The idea is that keywords in messages as well as “cashtags” can be expanded upon in a drop-down menu in the form of the latest headlines, stock, and Google and Twitter trends – the keyword being “relevant.”

Somewhere within the platform, there’s a vision.

“Tomorrow, as we talk about something, we will see relevant information come to us,” Gurle said. “There is no more search.”

For now, Symphony is working on creating partnerships, to implement, to collaborate on extending functionality, and to sell. While the financial sector is obviously the focus, Symphony is looking to expand not just into more verticals where regulations are more lax, but even, perhaps, to consumers.

“Our compliance will help us in adjacent markets,” Gurle said. “If you can do here, you can do there.”

Be sure to check out our upcoming piece that looks at these partnerships in detail.