The new offerings are aimed at business looking to upgrade their existing wireless infrastructure to the latest 802.11ac technology, and according to Linksys they offer up to three times faster speeds for connected devices over the previous generation of technology. 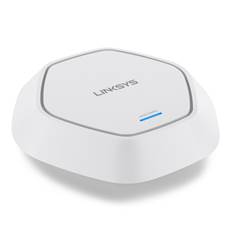 “With the proliferation of mobile devices such as smartphones and tablets in business environments, the need for faster Wi-Fi and more capacity is evident.  And with the Internet of Things moving into the office environment, everything will become connected going forward. It starts with notebooks and smartphones, but as we look forward,  door locks, card scanners, cameras and security sensors can also be added to that list,” said Steven Lin, director of Linksys business products, in a statement. “The Linksys Wireless-AC Access Points help provide manageable dual-band high speed wireless access along with Power-over-Ethernet, bridge mode for range extension and other advanced features SMBs need today.”

Some of the features of the new products include 802.11ac Dual Band support, support as a powered device with 802.3at (PoE+), support for up to 16 different SSIDs, and advanced security including 802.1X Supplicant, SSID to VLAN Mapping, MAC Access Control and Rogue AP detection. Other enhancements include wider 80 MHz channels for greater data bandwidth in the less-crowded 5 GHz band space.

The Linksys Business Wireless-AC Access Points are planned to roll out in April through major distributors, including D&H, Avnet, Newegg Tech Data and Ingram Micro.

Jeff Jedras
A veteran technology and business journalist, Jeff Jedras began his career in technology journalism in the late 1990s, covering the booming (and later busting) Ottawa technology sector for Silicon Valley North and the Ottawa Business Journal, as well as everything from municipal politics to real estate. He later covered the technology scene in Vancouver before joining IT World Canada in Toronto in 2005, covering enterprise IT for ComputerWorld Canada. He would go on to cover the channel as an assistant editor with CDN. His writing has appeared in the Vancouver Sun, the Ottawa Citizen and a wide range of industry trade publications.
Previous article
BlackBerry sees light at the end of the earnings tunnel
Next article
BlackBerry’s Secure Work Space gets U.S. government certification

TP-Link reinvents itself for the channel