“If you can get the answers to business questions quickly; you will ask (business related) questions more frequently,” Ellison said.

For example, an automaker that Ellison would not name used to run its parts of materials program to process orders in 58 hours, with 12c it took just 13 minutes. Another test showed 290 million ledger lines from 250 business units being processed in 4.3 hours. With 12c, Ellison said it took just 11 seconds.

“The numbers are stunning,” he said.

But one channel partner told CDN that 12c is Oracle’s response to SAP Hana. While Ellison admitted that Oracle was slow to enter the in-memory database game, he said that the company had different goals set on increasing transaction speed.

“It took a little time for us,” Ellison said.

“Customers do transactions on databases. Not having that ability in 12c was not an option,” Ellison added.

But what Ellison and the team at Oracle wanted to do was enable this speed by customer essentially flipping a switch. The company did not want customers having to re-write applications for in-memory use.

The dilemma with this is that there are two database formats: rows and columns and analytical. Oracle Database 12c has the ability to store data both ways. 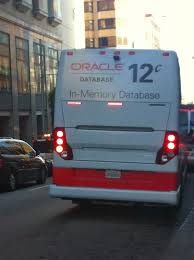 Oracle Engineered Systems such as Exadata have been optimized for the 12c in-memory database. Ellison provided a cost break down on this platform where the most recent vital data will be on DRAM, active data on Flash and cold data or archival data loaded onto disk. Exadata with 12c is able to prioritize the data on these levels so that not all data is run in-memory.

Oracle’s M6 Exabyte machine can scan billions of rows per second using single instructions processing where a dozen pieces of data is viewed as one item. Ellison said that this technology either Sun Sparc or Intel based was used mainly in scientific applications until now.

“With 32 TB processors you have 400 cores and that can process a lot of rows. I think a trillion rows, which sounds impossible,” he said.

Ellison said that for year’s column databases were “terrible” for transactions and could also be costly because of complex OLTP and indexes. Since 12c is a dual purpose database for analytics and queries sometimes 20 or more indexes needed to be updated.

“You are now going to have to throw all those queries and process away. We dropped the analytics indexes. That’s the magic,” he said.

12c will also have in-memory fault tolerance on Oracle Engineered Systems such as Exadata. It will duplicate in-memory data across nodes enabling queries to use a copy of in-memory data if a server fails. New Direct-to-Wire Infiniband accelerates scale-out for in-memory.