Waterloo’s Factory Square used to be associated with uncertainty and disappointment after BlackBerry Ltd.’s downturn more than seven years ago, but now it’s home to eSentire Inc.’s new global headquarters, representing a passing of the baton to a fast-growing cybersecurity company that is confident in its decision to grow the business in Canada.

Before the official opening of the 65,000-square-foot space Monday, which is double the size of its current location in Cambridge, eSentire CEO Kerry Bailey said it wouldn’t have felt right if the organization had decided to set up its HQ elsewhere. He also took the Toronto Raptors’ recent championship run, which Waterloo celebrated at its own version of Jurassic Park, along with eSentire’s strong year-over-year growth, as the universe’s way of telling Bailey the right decision was made.

“We had talked a lot about eSentire 2.0, and that eSentire 2.0 was going to be born in Waterloo, and that it would leverage everything we’ve done in the last 15-plus years,” Bailey told IT World Canada. “We said this would be the next step-function in the evolution of the company. The planets have aligned perfectly to make this happen.” 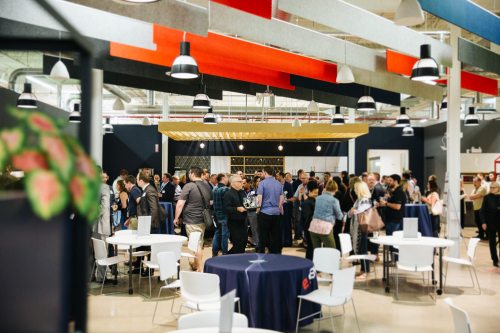 Guests at the company’s Community Open House at Factory Square on June 17. Photo submitted by eSentire.

That evolution, Bailey explained, means continuing to leverage the world-famous research hubs and universities that are now next-door neighbours to expand eSentire’s team of 300 specialists. He noted the rising volume of data makes it very easy for customers to lose control of where their data is stored and transmitted, and many of those customers simply want a subscription to a service that can alleviate those concerns. This is increasingly relevant as more organizations move away from the traditional data centre setup, and rely on infrastructure in branch offices to collect and process data generated by a bevy of chattering devices. Helping customers make that shift with strong security in mind is where eSentire’s growing ecosystem of channel partners, which now represent approximately 50 per cent of all sales, can really shine, indicated Bailey. Hunt threats in seconds, and shut them down in minutes – that’s the motto.

“But now we have a facility that is not only great for employees, but a great place to bring our customers and prospects to,” he said. Out of the $47 million USD in investments raised by eSentire earlier this year, approximately $5 million went into the modernization of the existing office space, explained Bailey. Additional investments were made to hire local talent.

Waterloo Mayor Dave Jaworsky, who became the city’s mayor December 2014, said the new HQ is the result of a seven-year turnaround for the area that began when BlackBerry cut more than 10,000 jobs.

“That turnaround is now complete,” he said, adding organizations such as Communitech played a big part in that process. “They helped us develop that resilience across the community and get through that downturn.”

Communitech’s president and chief executive officer Iain Klugman described eSentire as the region’s “best-kept secret” and a shining example of what the public-private innovation hub had hoped to see flourish as the sun set on the BlackBerry devices era.

When BlackBerry started slashing jobs, Communitech established a small internal team of 10 people that helped 73 per cent of the thousands of displaced workers find new opportunities in the region’s growing startup community. One of those startups ended up being eSentire.

“They’ve always been a smart engineering-driven company focused on building a real business,” said Klugman. “We don’t want one BlackBerry — we want 20 or more smaller companies bringing in $100 or $500 million in revenue. I think we now have a much more diversified ecosystem in place compared to the one that existed at the height of BlackBerry.”

Bailey is adamant that while the past won’t be repeated, it won’t be forgotten either. “That building has a heritage to it that touches everybody emotionally.”