Hiring neurodiverse people has given us an edge, says AirGate CEO

After flashing the Vulcan salute to a co-worker, cloud services engineer Alex Mandel returns to his desk at an open office space in Toronto to chip away at a growing to-do list. He works for cloud infrastructure solutions provider AirGate Technologies just outside of the downtown core in Toronto, and his duties include helping clients move data to Microsoft Azure and building new applications.

The absence of ping pong tables and arcade machines at the unassuming office–attractions one often finds in other fresh-faced startups–is evident. According to Mandel, AirGate’s most unique feature lies elsewhere.

“People at AirGate are so eager to work together and so accommodating,” Mandel explains. “It’s easy to make meaningful connections here and do your work your way.”

That sense of belonging is a big deal, he explains, because connecting with people isn’t always easy for him. Mandel is diagnosed with Asperger’s.

But working at AirGate has injected Mandel with renewed confidence in himself, he says. A few weeks ago, he was talking to a classroom at a local high school during its Career Day expo.

“I’m not sure how, or if, I would have been able to do that a decade ago or even do this interview,” Mandel tells the publication. “I would have been absolutely mortified talking in front of students – any sort of public speaking.”

Even with a computer programming background – and SQL skills he rarely uses anymore, he jokes – Mandel has had a hard time finding a job that he felt good about. Bouncing from one job to another in recent years, which included brief stints at other tech firms and grocery stores, made him question his self-worth.

“It was just hard to be confident in myself and understand what I’d be good at,” he says. “I was always wondering how I would be useful to other people and how I wouldn’t disappoint myself.”

Across the country, many jobs go unfilled because individuals with an intellectual disability or Autism Spectrum Disorder are not considered as potential candidates.

And based on data from 2015, most Canadians are okay with this. Half of the respondents in a survey by the Angus Reid Institute and the Rick Hansen Foundation noted that “it’s understandable” if businesses feel it’s risky to hire employees with disabilities.

AirGate’s co-founder and chief executive officer, Nicole Mumford, is not one of those people. The company’s goal since it was founded in 2014, she says, has been to prioritize inclusiveness and diversity, spanning gender, ethnicity and neurodiversity. The initiative means a great deal to Mumford, who has an autistic son. “He’s amazing,” she says.

AirGate currently employs two neurodiversity hires, including Mandel. Both are active in the field with clients. While Mumford is proud of AirGate’s hiring practices and other accomplishments – in 2018 they picked up Microsoft’s Infrastructure Innovation Award at the annual IMPACT Awards – she is well aware of the tech industry’s reputation for being unwelcoming. She has made it her mission to convince other people in leadership positions to take a chance and tap into these ignored talent pools.

“I’ve had quite a lot of negative experiences in the tech industry, which is not unusual for women – it’s not unusual for anybody,” she says. “I haven’t met anybody that hasn’t met some form of discrimination during their career. It comes in different forms and fashions.”

To help build that inclusive atmosphere, Mumford and the rest of the leadership team place a huge emphasis on character and initiative when looking for new talent. Skills remain essential, but there’s a reason they take a backseat, she explains.

“Teams help build better products, not individuals,” says Mumford. “In cloud, there is so much to learn. Look at Azure; there are hundreds of services and capabilities in Azure. Nobody is an expert in all of it. That’s why teams build success in the cloud, and that’s why organizations like us because we have teams that are diverse and allow us to provide high-quality solutions.

We’ve had clients say ‘give me the person who can do that’ because they’re getting more valuable output from the development activity.”

For example, she says, building a chatbot that can respond effectively to a wide range of questions is critical. Having a diverse team – and that can mean neurodiversity or someone with bilingual skills, emphasizes Mumford – dramatically improves that chatbots chances to answer questions that an individual with all the Azure certifications in the world might have overlooked.

Can’t do it alone

AirGate has quickly become one of Microsoft’s superstar partners thanks to its rapid growth and hiring practices. As a channel partner, Mumford says they placed their bets with Microsoft for several reasons. Microsoft Azure is one of the world’s biggest cloud providers second only to Amazon, and they also have strong relationships with enterprises, AirGate’s target customer base.

Microsoft’s own efforts around diversity and inclusion, which includes an Autism Program and the Ability Hack – an annual event that challenges employees to build solutions for people with disabilities through technology – was also a clear sign that the tech giant was the right fit.

“I did a speech at Microsoft Ignite a few weeks ago, and we had a number of applicants approach us after, which has been great. Even if they don’t fit for us, we’re trying to connect them to others,” says Mumford.

One agency, in particular, has helped AirGate in its mission to find neurodiversity talent. Ready, Willing and Able (RWA) is a national partnership of the Canadian Association for Community Living (CACL), the Canadian Autism Spectrum Disorders Alliance (CASDA) and their member organizations. It’s the agency Mandel used to connect with Mumford.

Meggie Stewart, the former autism outreach coordinator for Ready Willing and Able, was part of the support group that helped Mandel connect with AirGate more than a year ago, and prepare him for the new job. 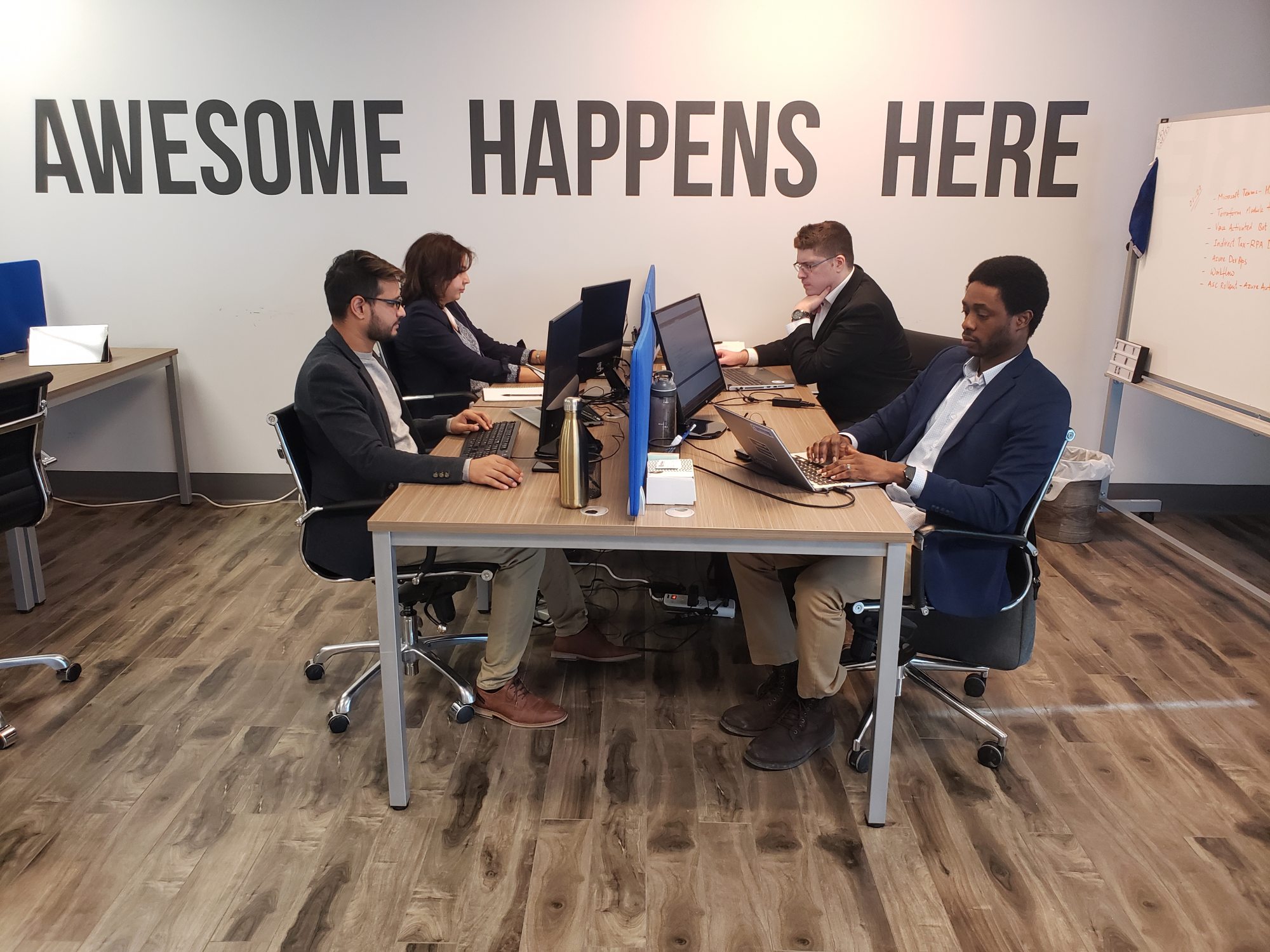 “I’m so glad to hear he is still working there and that he’s happy,” says Stewart, who is now the organization’s labour market facilitator.

Stewart is the glue that connects companies like AirGate with potential hires through a series of screening applications and interviews. Once that person is hired, Stewart will often work closely with that individual to ease them into their work environment.

Average productivity and performance ratings from employers who’ve hired through RWA are high. Nearly 90 per cent of businesses rated employees hired through RWA “as well as or better than average on contributing to the firm’s profit margin,” according to the 2019 RWA business case study. Hires from RWA also received well over 90 per cent approval ratings when it comes to punctuation, attendance, and use of sick days.

It doesn’t always work out, says Stewart, but she’s pleased to see more companies reaching out to the agency. When it comes to the number of people using RWA to find a job, Stewart says the total is closer to dozens as opposed to hundreds, but she’s pleased to see the awareness of the program slowly grow. Last month, Deloitte became RWA’s newest national employee partner, joining Home Depot, Pepsi, Costco, among a few others. In total, the agency has eight national employee partners.

Government funding has been a little touch and go over the past year, says Stewart, which prevented them from operating at full capacity.

Mumford says RWA is a great program that lacks support. It’s also not enough on its own, she adds. “We need new programs and investments from the governments at the federal and the provincial level to help bring these opportunities together with employers and candidates.”

The Canadian Channel Chiefs Council, she says, has also done a good job of helping promote these types of initiatives.

Rekha Rao-Mayya, country manager, GSI/SI services partners for Microsoft Canada, says in addition to running a good business, Mumford and the rest of AirGate has set a strong example for not only other startups but enterprises as well.

“I have deep admiration for the work they do,” says Rao-Mayya.

Mumford is proud of the work they’ve done as well, and equally impressed by Mandel’s growth in his role at the company, but she says she looks forward to the day when AirGate’s story isn’t a big deal. “I really don’t want us to be unique. That’s my goal. I want what we do to be done by everyone else.

For Mandel, the opportunity at AirGate means a significant deal. “It’s the best job I’ve had by a long shot.”

Alex Coophttp://www.itwc.ca
Former Editorial Director for IT World Canada and its sister publications.
Previous article
Infosys partners with IBM on new public cloud program
Next article
You might want to think twice about integrating RMM with backups, says Asigra