10 scenes from HP Discover 2013, from tapas to the turtle doves

BARCELONA, SPAIN – HP made the smart choice to hold is December Discover conference in sunny Barcelona. One of the big hits of the conference were the many tapas dinners executives, customers, channel partners and press attended. But that wasn’t the only highlight. Here are 10 scenes from the conference, along with links to CDN‘s full coverage of the event.

It’s hard to image that guests at the HP Discover Conference talked extensively about virtualization while enjoying the panoramic views of the five-star W Hotel right on the shoreline of Barcelona. But that’s exactly what they did.  It was appropriate that HP introduced two Converged Systems products, the 300 and 700, near the shoreline hotel because the new hardware was code named “Sharks.”

Even though HP Discover is held near the end of the year – when everyone is thinking about holiday shopping and some much needed time off – more than 10,000 people attended the show in Barcelona. And, that means a lot of name badges as the picture below indicates. But that’s not all. HP Discover also had more than 75 sponsors led by Microsoft and Intel, more than 500 session and 85 media outlets were on hand to cover the show.

One of the key announcements at the HP Discover Conference was StoreOnce, which is part of the Sharks technology initiative. Senior HP executives Bill Vegthe, David Scott and Tom Joyce during their keynote addresses had music from the film Jaws while two Converged Systems units slowly rolled across the stage, as you can see in this photo. 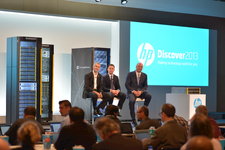 HP did its part for the movie industry and to a smaller degree the popcorn industry. The movie studio that brought you blockbuster hits such as Rocky, Star Wars, Avatar and Home Alone is now in the cloud. What is surprising about this announcement is that 20th Century Fox studios has been in the cloud for just six months. HP’s MoonShot technology was used to condensed 20th Century Fox’s data centre down to just a few racks and improved the digital supply chain. 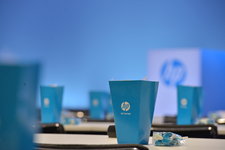 5. Tapas and terabytes at HP Discover

More than 85 media outlets from Europe, Latin America and Canada covered the HP Discover conference and those reporters were joined on the Monday night of the conference by nine senior executives from HP for a causal dinner at the hit Barcelona eatery Cachitos for some tasty tapas.

7. Meg Whitman’s new style of IT

Clearly HP senior executives were on message at this conference. And, that message is that HP has a new style of IT for the market place. Every executive that CDN spoke too talked about the “new style of IT”. HP CEO Meg Whitman during her keynote address outlined what new style was all about. You can read all about it below as we have listed all the news from the HP Discover conference. 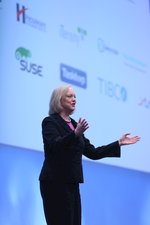 8. Do you know what HAVEn stands for?

What is HAVEn? And, more importantly what can HAVEn do for business. Well HAVEn stands for Hadoop, Autonomy, Enterprise Security and apps. HP used the Discover conference to introduce the new features of its second version of HAVEn. HP’s senior vice president and GM of HP Autonomy Robert Youngjohns said that HAVEn is being positioned by HP as its big data experience for enterprise customers.

9. New productivity devices on display while you dine

HP took time out during the HP Discover conference to showcase its new line of notebooks, tablets and printer products at the closing dinner at the Salt Restaurant inside the W Hotel. The technology giant took the wraps off a number of new commercial PC offerings, from sleek new EliteBook laptops to thin clients boasting new quad core processors.

10. HP executives in the cloud

Another star of the HP Discover conference was Bill Vegthe, the executive vice president and GM of HP’s Enterprise Group. Vegthe was at every keynote, presentation and press conference. But he took extra time to unveil the company’s new cloud strategy and product line. And, he needed it with 20 new cloud related announcements along with a new economic initiative called Flexible Capacity that will allow customers to have more cloud capacity than they need without paying for it. 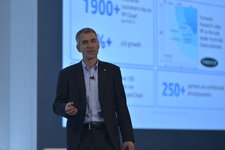