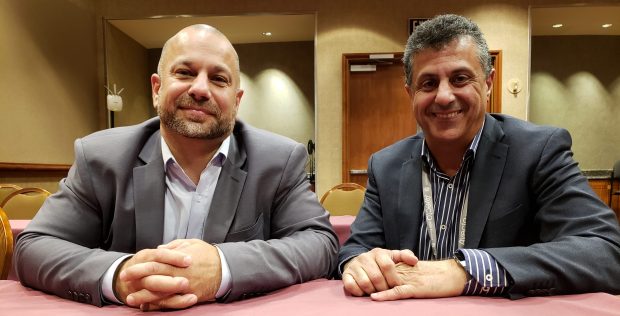 Small to medium sized businesses (SMBs) now have an opportunity to improve and maintain their defenses at a much more affordable rate, according to Converge Net president Chris Symeon. Mvision also allows Converge Net to deliver those services without “an army”, as Symeon puts it, doing significant leg work.

“It’s a win-win for both,” he told CDN during the last week’s McAfee Mpower conference in Las Vegas. His brother Nick, the vice-president of the business, said he’s noticed SMBs become increasingly susceptible to the latest malware and cyber attacks. They’re often understaffed and lacking the resources needed to protect and maintain security across multiple endpoints, allowing a laundry list of threats – coin-mining malware being the latest – to creep in undetected and cause damage. Research backs this up as well.

Few enterprises exist in Quebec, so organizations turning to Converge Net and its 24/7 French-speaking support systems are usually smaller businesses. Symeon said they do 5,000 – 8,000 service calls per month, and Converge Net’s work in the last year earned it McAfee Canada’s Partner of the Year award.

“We’ve worked with them as a partner for almost 20 years. They’re excited about what we’re doing,” said Symeon moments after hearing about the award.

In addition, the two brothers expressed excitement around the partner summit that preceded MPower. Unlike in previous years where synergy across McAfee products became a bit of an afterthought, Nick said McAfee’s message was crystal clear this time – infrastructures are moving to the cloud so security should follow, and experienced MSPs will play an increasingly important role when it comes to adding value to the Nvision lineup of products. For Nick, that means expanding on the software-as-a-service (SaaS) solution Mvision Endpoint (ePO) and providing customers with the best single view experience possible. MSPs with enterprise customers will likely see a lot of opportunities with Mvision Endpoint Detection and Response, according to Raja Patel, McAfee’s vice-president and general manager of corporate security products.

“There’s an upcoming opportunity in the EDR space to add continuous value because our customers just don’t have the resources,” Patel told CDN.

McAfee CEO Chris Young echoed Patel’s comments during a Q&A with reporters. He cited a surge in the number of partners becoming solution providers.

“Many of our partners are transitioning their business models to be less about being a value-added reseller and equipment providers and becoming more of a service or solution provider,” said Young, suggesting partners should look at ways to give customers unique insights into an attack to answer the often unanswered questions about where an attack came from and what it was targeting. That’s where many of the business opportunities will come from, he indicated. “The evolution of our product portfolio has been very well received by partners.”

The availability of Mvision on AWS, Young added, has also been a win for McAfee and its partners.

‘No excuse’ for putting budgets ahead of security, says McAfee country manager for Canada

“I would really like to see customers in Canada moving towards adoption of newer technologies faster,” he told CDN.

The transition will never be perfect, but it’s made significantly easier with advancements in cloud technology and the experienced McAfee partners, such as Converge Net, building their business around delivering and maintaining advanced protection.

“The message for Canada is that now there is a simple way to move forward with adopting advanced protection … Mvision gives us a very easy way to do that,” he said.

“[Mvision] is making our lives much easier…it’s a huge leap forward.”

There’s still a lot of reacting happening in the world of cybersecurity, but Patel said it’s no longer a cat and mouse game between security software manufacturers and the world’s cyber threats. McAfee is pulling data from more than 1 billion sensors across the world, something the company touted frequently last week, to help them become a bit more proactive in their approach to cyber security.

“We’re not just responding to threats with a new widget, we’re getting a lot smarter,” he said.

McAfee to launch new channel program in the New Year